On the beginning of Passover a man named Jesus, who calls himself “Son of Man” and some called “King of the Jews” was executed by being nailed to a cross until dead.

After Jesus died he was placed in a new tomb donated by Joseph, a rich man from Arimathea who had become a follower of Jesus. The stone was rolled to cover the entrance of the tomb. The next day Pilate himself ordered that it would be sealed, and had his soldiers to guard it from tempering.

On Sunday morning there was an earthquake. Roman guards claim to have seen an angel roll away the stone, breaking the seal. These ‘very brave, strong, and armed, Roman soldiers’ fainted with fear.

The angel told two women who happen to be there, that Jesus has risen from the dead. The angel then showed the women the empty tomb. Later that day there were reports of people seeing this risen Jesus walking around as a man, not as a ghost.

Word has leaked out that the leading Hebrew priests bribed the soldiers into saying the body was stolen when they were asleep. The Roman Officials are baffled on the conflicting reports but are investigating. If the soldiers were sleeping, they would be most severely disciplined. If the stories about Jesus being alive and well after being tortured and nailed on a cross, then stabbed by a soldier to ensure that he’s dead, is true; the Roman Officials admit they are clueless as what to do. 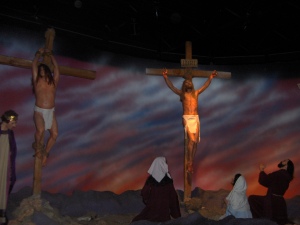 Roman Officials are baffled on how to handle Christians.

A year and a half after Jesus rose from the dead, there are some uncomfortable facts for some. Over 500 people have seen Jesus since resurrection. And some of them even ate with him.

The disciples who ran as cowards when Jesus was arrested, are now willingly risking their lives talking about him. In fact many who are now called Christians are risking their lives, spreading the good news of salvation. (see the book of Acts) The good news is that God loved the world so much, He gave his one and only Son, so that everyone who believes in him will not perish but have eternal life. I believe this good news, as well as my editor who happens to be my wife. We have salvation not because of any good works, but because of grace through Jesus.