Archive for the tag “Coronavirus” 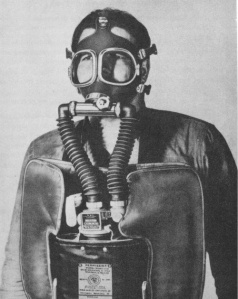 Many years ago when I was in boot camp, we had a lesson on OBA (Oxygen Breathing Apparatus) which is used for fire fighting onboard a ship. The instructor picked a ‘volunteer’ from the class. I was that ‘volunteer’. To be honest I did not volunteer, but was ordered to stand in front of everyone so the instructor could show everyone how to use it. He put the mask over my head and pulled the straps tight, creating a prefect seal around my face. Instantly I realized I couldn’t breath. I tried to pull the mask off but it was too tight. Panic started to set in. Then he calmly said, “This is what can happen if you don’t know how to use this. If you can’t breath, press this button here.” He pressed the button to show the class and instantly fresh air came in. I could breath again. Then he said “To make it so you can go into smoke filled compartments on the ship, pull this cord. The canister will then start a chemical reaction, producing oxygen.” He let go of the button cutting off my air supply again. Then with a quick yank of the cord. The two bags on the side inflated. Then I could easily breath the newly produced oxygen. I could now enter hazardous smoke filled areas of a ship safely.

This happened over forty years ago. And even though this guy may not have been nice, (Boot camp is not a nice experience.) I was never really in any danger. I was not going die, and I was not harmed.

Now fast forward to about six weeks ago. I had a little shortness of breath. But not bad. The next day it was worse. I didn’t know why. No medicine seemed to help. The next day was even worse. Why? I was beginning to wonder if I should see a doctor. But I decided not to. Right or wrong, maybe it’s just a guy thing, but I didn’t want to bother a doctor over nothing. But that evening my breathing was bad. I knew I should maybe go to the ER. But the way I felt, I didn’t want to drive all that way at night. I decided to go in the morning. Who knows, maybe it would get better.

The next morning I could hardly breath. I was weak. I was cold and achy. I knew I should get up to take some medicine. But I couldn’t get out of bed. I knew I should get up and for some reason I believed I should have some protein. It took everything I had to get out of bed and get dressed. I made it in the kitchen and forced myself to fry some eggs and sausage. After I ate, I sat in the recliner in the living room with a blanket on me and slept. By evening I felt a little better. Someone called me on the phone. After talking a little, this person insisted that I call the doctor. I did. It was after hours when I called. Yet they were so busy from so many people panicking over COVID-19, they said they would have to call me back. I slept some more.

The next morning, I felt amazingly good. Unbelievably good. About mid morning the doctor called. I told him how I felt. He said I may have had the virus, but somehow got over it. I have not been tested so we may never know. I also have not been tested for the anti-bodies yet.

When I looked back to how sick I was, I noticed something odd. I had no fear. No worries about my well being. I had a very strange peace. How odd. I am over 60, and I have health issues. Yet, I had zero fear of death. I knew it was bad. I knew I could die, BUT I also knew I could live and be well. And like I said, a very odd peace. Please understand. I was not giving up. I guess the best I could say is, I was trusting God.

I remember hearing about this same odd peace from other people. I know of two people who have had open heart surgeries. They both said they knew they could die, and yet they had this peace with them. Both of these men were Christians and they were trusting God.

Normally when I am hurt or sick I fight to get better. When something breaks or somehow goes wrong I get stressed out about it until it’s right. I was greatly stressed out when my wife got sick. Yet I had complete peace when I got so sick, six weeks ago. Will I get stressed out again in the future? Most likely yes.

But we must keep in mind John 14:27-28 “I am leaving you with a gift—peace of mind and heart. And the peace I give is a gift the world cannot give. So don’t be troubled or afraid. Remember what I told you: I am going away, but I will come back to you again. If you really loved me, you would be happy that I am going to the Father, who is greater than I am.”

He does this for those who are right with God. But how do you become right with God? We are made right with God by placing our faith in Jesus Christ. And this is true for everyone who believes, no matter who we are. Romans 3:22

It also says in Romans 10:9-13 “If you openly declare that Jesus is Lord and believe in your heart that God raised him from the dead, you will be saved. For it is by believing in your heart that you are made right with God, and it is by openly declaring your faith that you are saved. As the Scriptures tell us, “Anyone who trusts in him will never be disgraced.” Jew and Gentile are the same in this respect. They have the same Lord, who gives generously to all who call on him. For “Everyone who calls on the name of the Lord will be saved.”

If you are not saved, you will be like the chaff in Mathew 3:12. This will be much worse than any virus.

Many years ago I was stationed on a United States Coast Guard cutter in Alaska. One day because of a physic, many of us thought our ship would sink in the Bering Sea. We sought out the only Christian we knew, to learn about God. To hopefully get right with God. But once the threat was over, almost everyone went back to the life they lived before.

September 11, 2001 terrorist flow airplanes into New York’s World Trade Center. Killing a lot of people. Almost everyone was worried and scared. People started talking life and death. It was the prefect time for us Christians to tell people about Jesus. But after awhile everybody went back to their normal activities. But what is interesting, sin increased. More theft. More murder. Killing both adults and kids, and even the unborn. Proverbs 6:16-17 says:
There are six things the Lord hates—
no, seven things he detests:
haughty eyes,
a lying tongue,
hands that kill the innocent,
No one is more innocent than the unborn.

Some of the other sins are sexual. Romans 1:26-27 That is why God abandoned them to their shameful desires. Even the women turned against the natural way to have sex and instead indulged in sex with each other. And the men, instead of having normal sexual relations with women, burned with lust for each other. Men did shameful things with other men, and as a result of this sin, they suffered within themselves the penalty they deserved.
I know many people will say this is OK because Jesus never talked about it. But Jesus never talked about rape, either. I hope you won’t say that’s OK.

But I believe the worse sin is mocking God. He doesn’t like that. More and more people are mocking God.

But what if other things are happening? What if Luke 21:11 is happening?
There will be great earthquakes, famines and pestilences in various places, and fearful events and great signs from heaven.
Jesus said this when he was talking about the end. Not the end of all time, just things as we know it before He comes.

Who would have guessed that COVID-19 would affect my phone?

It will get bad. I do believe things will ease up for a little while, but then the next bad thing will happen. I do believe it will be worse and will affect things in ways we would have never guessed.

What if when a nation sins enough, that God decides to destroy that nation? What if God hates the sins I mentioned above, as well as other sins? What if one sin can separate us from God forever? Once you sin, that’s it. You are a sinner. And everyone has sinned. Even you and even me. A sinner that is not right with God and will suffer eternal punishment.

But what if there is a loophole? A loophole created by God Himself, only because He loves you? John 3:16 says For this is how God loved the world: He gave his one and only Son, so that everyone who believes in him will not perish but have eternal life. Jesus died for us. He paid the penalty for our sins on the cross. But three days later He rose again to life! In fact, we just celebrated Him raising from the dead with Easter.