This story is based mostly on the book of Job. And while many people socialite the book of Job with doom and gloom, there is also some surprising knowledge and technology in it.

Here is the story.

My day started off as usual. I woke up just before dawn, walked into the kitchen and started making breakfast. My wife was sleeping in and my son was next to me chatting about what he learned in school the day before.
“Dad, guess what. Did you know that clouds are really, really heavy?”
“Isn’t that something?” I answered.
“Yeah and the whole Earth is just a ball floating in space, with nothing holding it up!”
“That’s good. How are you doing with history?” I asked.
“OK I guess. We learned about the flood that happened a long, long time ago.”
I laughed. “You do realize that your Great-Grandparents were on that boat, don’t you?”
“Yeah, but it still happened a long time ago.” He said.

After breakfast we both left; my son to school and me to work. On the way I came across a panhandler. Life is rough and it’s getting rougher. There are homeless people, the outcast of society, living in caves now.

I continued walking and off in the distance I could see workers moving 100 ton blocks of stone into place. I watched them do it once. They used a bladder made from the hide of a brachiosaurus which some call a behemoth to move the big stone blocks. One of the stones would have the bottom hollowed out with the bladder in the hollow. When they pump water into the bladder, the heavy stone would rise up, and could then be pushed into place.

I passed along the edge of the marsh as a short cut to work. I don’t like this area. The alligators are big and mean. But the leviathans or ankylosaurus are meaner. It’s a pretty walk, but it can also be a deadly one. 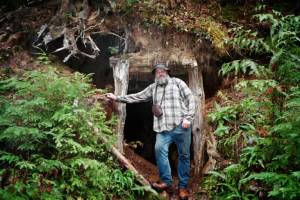 I finally made it to work and found everyone is very sober and quiet, not knowing what the future will bring. My job is to go down into the mine to bring out the ore. The mine is deep enough you can feel the heat coming from the center of the Earth. A smelter is near the opening of the mine to extract the copper from the ore. 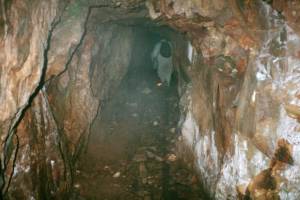 Inside an abandoned mine, somewhere in the Cascade Mountains of Washington State

We worked without saying much. But then there is no way we could hear each other anyway. The heavy equipment is very loud as it drills tunnels through the rock. The carts hauling the ore out added to the noise. Then it all went quiet. Our last drilling machine just broke down.
“Can we fix it?” Someone asks.
“Don’t know. We weren’t able to fix the other two. We don’t have any mechanics or welders anymore.” Someone else answers.
I had to speak up, “Why are we still working this mine anyway? None of us know how to run the smelters! For the last two weeks, our civilization has been falling apart!”

Up until two weeks ago we were arrogant. With our technology we were starting to think we could do anything. We could build anything. Some of us were beginning to think that we no longer needed God. So we started to build a mighty tower as a monument to ourselves. That was when God came to confuse our language so that we could no longer understand each other. Then the LORD scattered us all over the earth, and we stopped building the city. We stopped doing a lot of things. The place is now called Babel. Soon it will fall to ruins.

People who are skilled in making things no longer know how to get the materials. They don’t know who or how to ask; since each group now has their own language and are scattered to who knows where. Our economy is falling apart. Because of this fix we are in; we are becoming primitive. We were one language with just one government in the whole world. Now we are just a bunch of minor tribes speaking in different tongues and falling into a very primitive lifestyle. I am guessing that in time our great civilization with our great technology will become only a myth.

I hope you enjoyed my story.

Some of you maybe wondering why I choose to use a bladder to move a large stone. Years ago I had to move a safe into a small room. The safe weighted about 400 to 450 pounds. (180 to 200 kilograms) It was to be place in a corner of a room behind the door. The room was small enough that the safe could not be tipped. This means a hand truck could not be used. Also the safe could not be pushed into the corner. The safe sits on two 2X4s. I moved the safe by myself. How?

Answer: I slipped a small tire inner-tube under the safe and pumped just enough air in the tube to rise the safe off the 2X4s. Than I pushed the safe and let the air out. Because of the shape of the inner-tube, I could push it only a few inches (centimeters) at a time. It was slow, but I did it. I know of no other way to do the work.

I believe if you have a large bladder and fill it with water, you should be able to move a lot of weight.

For fun look up ancient mines and technology. In a my post What Happened? I talk more about society loosing knowledge.

One more thing, entering mines can be very dangerous. Some people never make it back out alive. Be careful.