Who Should Be President? 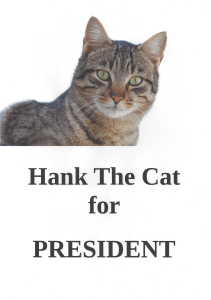 I don’t know. Like many people, I haven’t found anyone who is worthy. I almost feel like the best candidate should be Hank The Cat. For the fun of it, I made a small poster saying Hank The Cat For President For 2016. I downloaded the cat photo form the Internet. I then brought it to a locale Hearing Loss Association chapter meeting. People loved it.

But seriously, as Christians who do we vote for? I don’t know. But I do know what God’s word says in Genesis 12:1-3 NLT:
The Lord had said to Abram, “Leave your native country, your relatives, and your father’s family, and go to the land that I will show you. I will make you into a great nation. I will bless you and make you famous, and you will be a blessing to others. I will bless those who bless you and curse those who treat you with contempt. All the families on earth will be blessed through you.”

Before Israel even became a nation on the map, Egypt made slaves of them and treated them harshly. God then in return, treated the Egyptians even more harshly. This has been repeated several times throughout history with different countries and people who abused Israel. So many countries who went against Israel and then fell.

During World War II, before there was modern day Israel, the Nazis tried to wipe out all the Jews. They failed. There are still Jews, and now there is even Israel. But, where is that Nazi army? They’re just gone. They fell.

Now it is true that Israel did fall from time to time. But only because of the sin they did. Also God aways brought Israel back to life. Where are the other armies? They’re still gone.

With all this in mind, why would any Christian who believes in God’s word, want to vote for anyone who would wants to hurt Israel. I know they will say they support Israel. But they also they want a two state solution for Israel. What they are saying is, “Why yes I support Israel. I support Israel so much, I would like to rip that little country in two and give half to their enemies.” Wow, I hope I don’t have friends like that.

I believe anyone who votes for someone who wants to harm Israel is like saying: “Lord please destroy us! We’re morons!” To be honest, I’m surprised we’ve haven’t fallen yet.

I know of many countries all around the world are against Israel. And I know some may argue, “Is God going to make all those other countries fall?” My answer is “Why not?” I wonder if enough countries fall, if that would bring in the Anti-Christ. If enough countries fail and if people get desperate enough; they may become willing to follow someone who will lead them. That person will deceive many. That person will be the Anti-Christ. Then later a very large army will come up against Israel. And that’s when Jesus Himself will come and defeat that army. Revelation 19:19-21 That army will be defeated. They will fail and they will die.

I’ve talked with people who have said that this Israel shouldn’t be here. And yet there it is, and there is nothing anyone can do to change this fact. I do not believe the LORD will not allow this Israel to be conquered, period.

So who will I vote for? I honestly don’t know. But, I will not knowing vote for somebody who will harm God’s country. In my mind, that’s just stupid. And that is my thoughts.

By the way Hank The Cat For President wasn’t all my idea. I got the idea from an Alaskan cat that was mayor. Here’s the link.