The Political Party Of Jesus 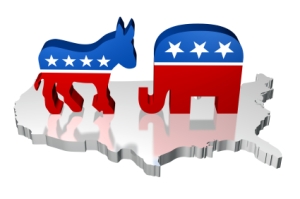 If Jesus were to come back right now, what political party would He belong to? I have been told at times that if Jesus came back now, He would be Democrat. Well the people who say that are wrong.

Right about now some of you maybe happily thinking ‘Of course not. He would be a Republican.’ And you too would be wrong.

I’m wondering if there are some who believes Jesus wouldn’t get involved in any form of political affairs since He is a religious figure. Believing that one must not mix religion with government affairs. If so, they too would be wrong.

Jesus is not a Republican, or Democrat, or Socialist, or Communist. Oh, and the early Christians in the book of Acts were not Socialist either. Socialism is where the government takes (often by force) and gives some of it to others. The early Christians in Acts gave out of their hearts with love to help others.

Let’s say there is someone in need. Maybe because of earthquake, flood, health problems, homelessness, you name it. And let’s say you personally care and want to help, so you give your time, or money, or both. That is what the Christians in Acts were doing.

Acts 2:44-46
And all the believers met together in one place and shared everything they had. They sold their property and possessions and shared the money with those in need. They worshiped together at the Temple each day, met in homes for the Lord’s Supper, and shared their meals with great joy and generosity

So what political party would Jesus be part of? His own! Jesus is KING. He is LORD. Besides, what makes you think He would be that impressed with anything we have?

There are two places in Revelation that you may find interesting. The first one is when the Anti-Christ’s armies will go to war against the Lamb (Jesus), but the Lamb will defeat them because he is Lord of all lords and King of all kings. And his called and chosen and faithful ones will be with him. Revelation 17:14

The second is Revelation 21:22-26 which will happen after the Anti-Christ is gone, after the thousand years of Christ’s reign, after Satan is released again, and after the whole world is destroyed, then recreated. Revelation 21:22-26 says:
I saw no temple in the city, for the Lord God Almighty and the Lamb are its temple. And the city has no need of sun or moon, for the glory of God illuminates the city, and the Lamb is its light. The nations will walk in its light, and the kings of the world will enter the city in all their glory. Its gates will never be closed at the end of day because there is no night there. And all the nations will bring their glory and honor into the city.

So the LORD will rule the world and yet there will be different nations. How this will work, I’m not sure. The only thing I can think of is the United States of America. Here we have one president, one federal government with federal laws. However we are made up of 50 different states with different laws and customs. For an example: the state of Oregon has an income tax, but no sales tax. Where Washington State has no income tax, but it does have sales tax. In Louisiana they celebrate Mardi Gras. Not so much in the other states. Also what’s legal in one state may be illegal in the next. Yet we are all united states, or United States of America. However when Jesus reigns, it will be perfect.

So what political party will Jesus belong to? His own. He’s KING and LORD. And that’s my thoughts.

One thought on “The Political Party Of Jesus”